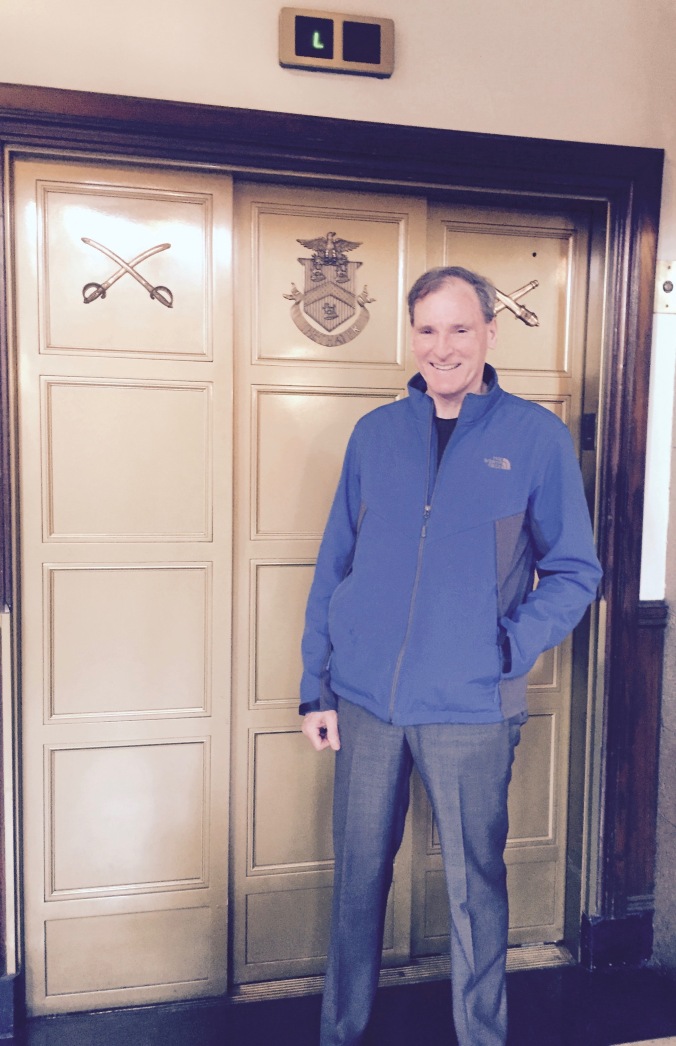 The Curmudgeon was very happy the Thayer elevator was working on Sunday.

The Curmudgeon is my hero.

He spent 10 minutes stuck in an elevator at the Thayer hotel in West Point, N.Y., and didn’t flinch. When the doors were finally pried open by hotel staffers, he emerged with one request: “I’d just like to go up to my room, take off my jacket and comb my hair.”

What a stud. As everyone in the lobby panicked, scrambled for elevator keys and called the fire marshal’s office, my sweet Curmudgeon showed grace under fire. He even made a business call during his sudden confinement. 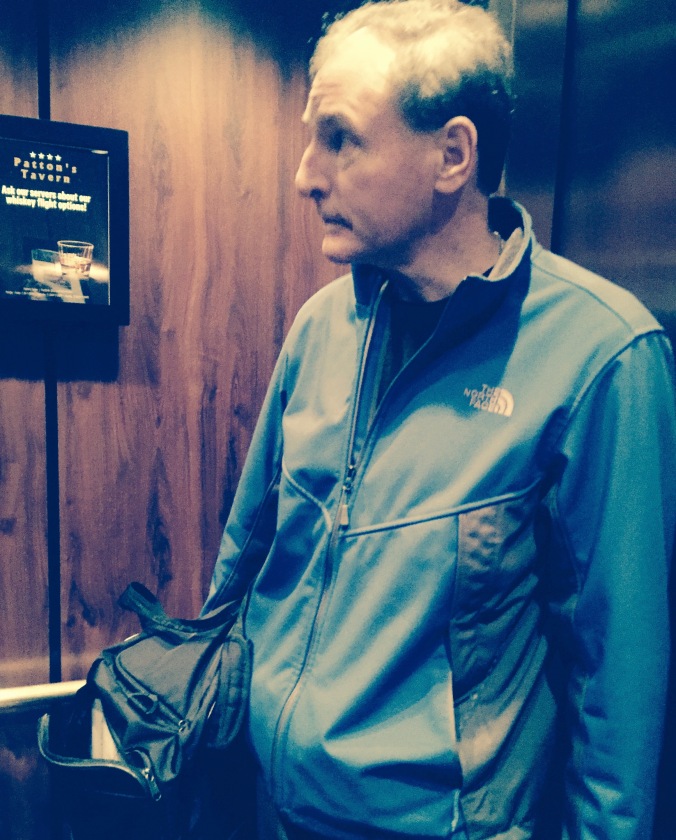 Getting stuck didn’t seem to faze him.

You don’t think there’s anything new to discover after a marriage of 34 years, but The Curmudgeon is full of surprises and contradictions. A man who is terrified of mice jumped into the roaring Atlantic to save a drowning woman. A man who stresses over forgetting Bisquick for a two-week summer vacation is calm trapped in a tiny box suspended by cable.

We arrived at the Thayer late Friday after a two-hour drive to watch our son’s tennis team play against West Point and some other colleges. His team was not expected to do well – and didn’t – but we love the sprawling campus overlooking the Hudson River. Last year, his team stayed at the Thayer, while we stayed in a Hampton Inn in Fishkill, N.Y. We vowed to stay at the historic Thayer if we returned this year.

Located just inside the gates of West Point, the Thayer is about the closest we’ll get to being in the military. You need to show ID at the gate, and it’s clear you’re inside a military campus. You awaken at 6 a.m. to the distant sound of cadets chanting in unison as they run through campus. It’s not intrusive but charming, reminiscent of Richard Gere and company in An Officer And A Gentleman.

As you fret about your daily exercise goals – shall I jog or hike today? – students in army fatigues carrying 50-pound packs walk-jog by you. “Hey,” I say to the Curmudgeon. “I guess it’s time to go watch the candy-asses play some tennis.” I’m only half kidding. We can’t even convince our 20-year-old son to run a little to get in better cardiovascular shape. 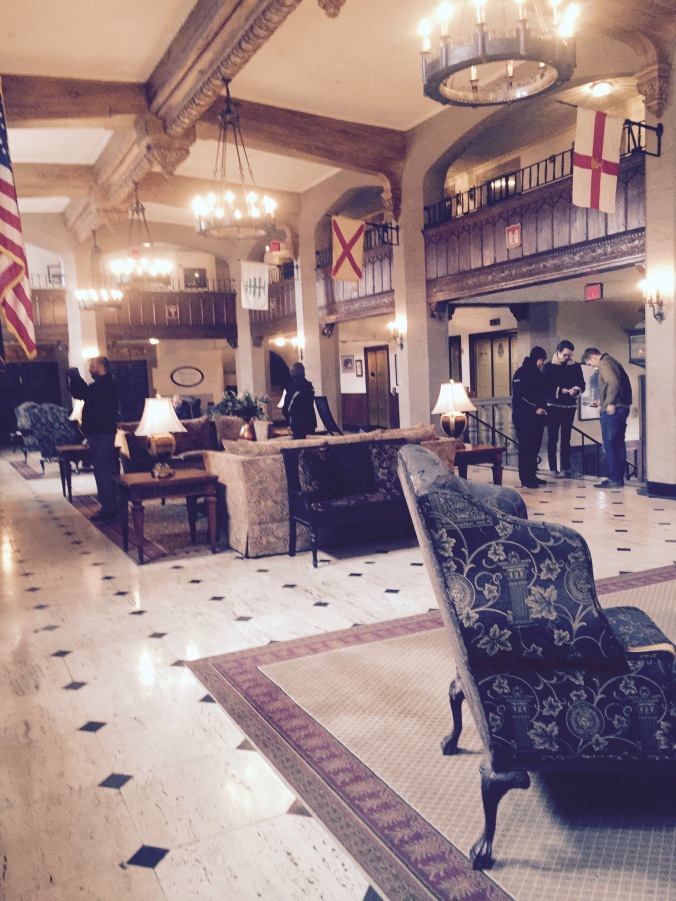 Walking the hallways lined with portraits of famous generals and prominent West Point graduates (Stonewall Jackson’s outside our room, Duke coach Mike Krzyzewski is just down the hall) instills an enormous sense of history and pride. The portraits and plaques remind you of the sacrifices made to protect our country and flag. It floods you with a spirit of patriotism, something in short supply these days.

The Thayer reminds you of everything good and right about our country – life, liberty and the pursuit of happiness. You momentarily forget the issues fracturing our nation, and are proud to be an American. You long for our leaders to begin governing the way our founders intended.

The fact that our visit coincides with national and local marches to protest school shootings across the nation seems fitting. At the end of the day, after all the debate and dialog, every American wants to feel safe going to school, houses of worship, the movie theater or the mall. No matter what your stand on gun control, it’s hard to debate the right to feel safe.

One of the most interesting aspects of being at West Point is the need for ID to get anywhere, and remembering to have your license handy. This is hard for me because I have one of the most disorganized wallets in the western world.

Armed officers want to know where you’re going, and why at all times. As I pulled to the Thayer gate to return to the tennis center on Sunday, a guard asked if I had weapons or guns in the car. “No, of course not,” I said.

He apparently didn’t like my tone, or something about me. “Step out of the car ma’am, and open the trunk,” he said. I was allowed to enter after a cursory inspection of the trunk. 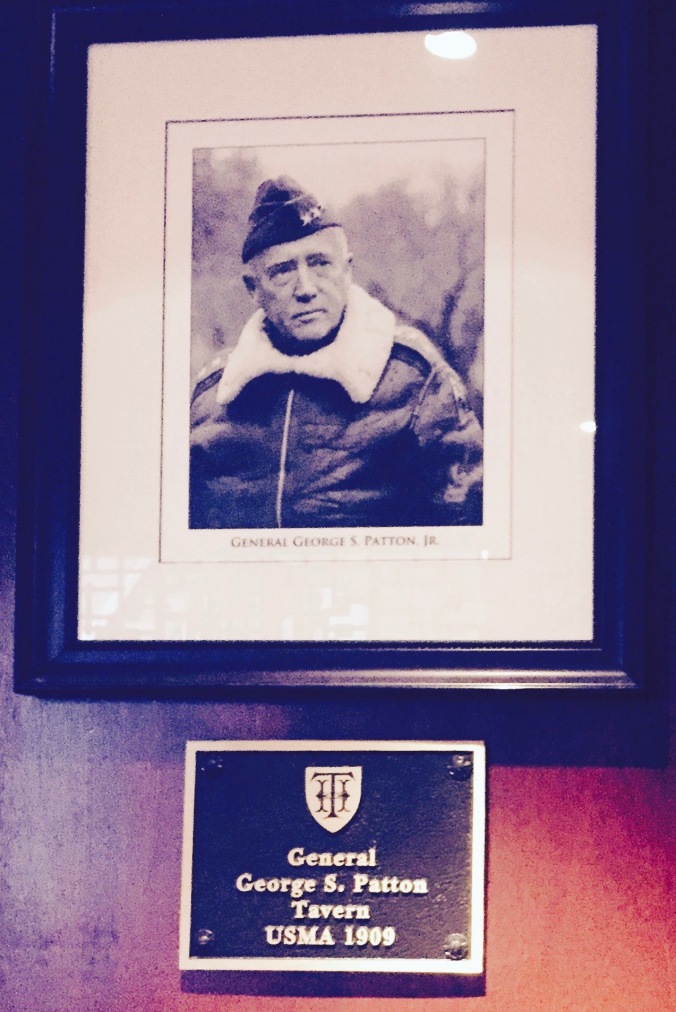 We spent a fair amount of time in the tavern named for Gen. George S. Patton.

The Curmudgeon disappeared to park the car shortly after we checked in around 10 p.m. After he was gone for 15 minutes, I suspected he had stopped into the kid’s room on the first floor. He can never resist a chance for alone time with our son. In fact, he loves telling me when he calls him from school, adding, “Did you hear from him too?”

I was just starting to get annoyed when my cell phone rang. It was The Curmudgeon shouting over a loud buzzing sound. “Hey, I’m stuck in the elevator. Can you get someone to help me?”

I ran to the lobby, and summoned help. A security guard kept asking me if he was OK. “Yea, he’s just stuck in the elevator and wants to get out,” I said. “We haven’t even really gotten into our room yet.”

The Curmudgeon remained remarkably calm. His only complaint was a ringing in his ears from the emergency buzzer. But I began to get a little panicky. An admitted claustrophobic, getting stuck in an elevator is among my worst fears. Getting stuck in a small elevator with no emergency door on the ceiling would freak me out.

After some fiddling and cursing, the door flew open. The Curmudgeon was leaning against the back of the elevator. He looked surprised, almost shocked, that he was suddenly sprung.

The manager rushed over to see if he was OK. She asked if he wanted to go to the hospital. When he declined, she said she’d need to write up an emergency report. The Curmudgeon agreed, with one caveat: “I’ll talk to the fire marshal all night,” he said. “But if I don’t eat something, I’m going to pass out.”

The Curmudgeon scored free drinks and dinner in the restaurant tavern for his trouble. And when we checked out on Sunday, he made sure it was 10 minutes late, making up for his lost time in the elevator.

17 thoughts on “My Calm Curmudgeon”